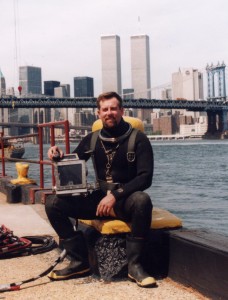 John Chatterton is one of the world’s most accomplished and well known wreck divers. He was one of the co-hosts for 57 episodes of the History Channel’s Deep Sea Detectives television series, and has worked as a consultant to 20th Century Fox, Paramount Pictures, Universal Studios, and CBS. Prior to his career in television, John spent twenty years working as a commercial diver in and around New York City, and on September 11, 2001, was actually working on a project in the water underneath the World Financial Center, across the street from the Tower #1.

His passion has always been researching, locating, and diving the world’s shipwrecks. In 1991, the discovery and subsequent identification of the German submarine U-869, off the coast of New Jersey, was the subject of a television documentary, Hitler’s Lost Sub, a two hour special for the popular NOVA series on PBS. This same story was the subject of a Random House bestselling book by Rob Kurson, Shadow Divers. It has been published in more than 23 languages, as well as an audio book  The movie rights to the international bestseller have been purchased by a major studio.

Chatterton was a member of the first technical diving expedition to Ireland and the legendary wreck of the RMS Lusitania, in 1994. A few years later, at a depth of 400 feet, he was the first diver to use rebreather diving technology on the wreck of HMHS Britannic, near the island of Kea in Greece. He was also the sole American on a British expedition, sponsored by Yad Vashem and the U.S. Holocaust Museum looking for the historic shipwreck Struma, deep in the Black Sea near Istanbul. These dives in Turkey were chronicled on the HBO documentary Struma. Chatterton has also managed to make over 160 dives to the well known wreck of the Andrea Doria, south of Nantucket Island in the North Atlantic.

In August of 2005, John and his partners put together an expedition to the most famous shipwreck in the world, Titanic. They dived the wreck to a depth of approximately 12,500 feet in the MIR submersibles from the Russian Research Ship, Keldysh. Their Titanic exploration has been featured in two History Channel specials, Titanic’s Final Moments – Missing Pieces and Titanic’s Achilles Heel. The programs were produced by Chatterton, fellow Shadow Diver Richie Kohler, and Emmy Award winner Kirk Wolfinger. Chatterton returned to Britannic in 2006 with his partners for another television production, this time about Titanic’s sister ship.  Author Brad Matsen brought the story of these expeditions to bookshelves with his bestseller, Titanic’s Last Secrets.

For another NOVA television project in 2009, John traveled to Hawaii where he participated in dives aboard the Pisces submersibles operated by Hawaii Undersea Research Laboratory. This project documented the Japanese Midget Submarine I-16tou, from the infamous December 7th attack on Pearl Harbor. These dives, well in excess of 1000 feet of seawater, were part of the NOVA program, Killer Subs in Pearl Harbor. For this same project, John was able to dive the USS Arizona, working with the US Parks Service, and the US Navy Mobile Diving Salvage Unit One.

Chatterton and his longtime friend John Mattera, are the subjects of another Rob Kurson book, Pirate Hunters, recently published by Random House. The book tells the story of their search for a 17th Century pirate wreck in the Dominican Republic, where John spent several years. Recently, Universal Studios has contracted film rights to both, Shadow Divers, and Pirate Hunters.

For literally hundreds of years searchers have tried to unravel the secrets of the mysteries surrounding Oak Island, in Nova Scotia. In 2015, John was contacted to dive to the bottom of the difficult and dangerous 10X Shaft on Oak Island, for the History Channel program, Curse of Oak Island. In 2016, he returned to Oak Island, this time to dive Borehole C-1.

At present, there are a several ongoing wreck projects where John is involved. Chatterton makes his home in Boca Raton, Florida, where he also trains technical divers.