Final Report on U869

Final Report on the Location and Identification

of the World War II German Submarine U-869

The information contained in this report was developed by the authors over a six year period with the assistance of numerous other divers, historians, and war veterans.  This information positively identifies the wreck of a submarine located approximately sixty miles off the New Jersey coast at 39º 34’ North Latitude, 73º 02’ West Longitude, as the World War II German Submarine U-869.   The U-869 was built at the Deschimag shipyard in Bremen and commissioned into the German Navy on January 26, 1944.

Prior to this date, it has been universally agreed that the U-869 was sunk in action at 34º 30’ North Latitude, 8º 30’ West Longitude, by the US Destroyer Escort Fowler and the French Submarine Chaser L’Indiscret on February 28, 1945.  The reported sinking of the U-869 at this location off Gibraltar is incorrect.

On September 2, 1991 the late Captain Bill Nagle and John Chatterton led a team of experienced amateur shipwreck divers on an expedition to explore an unknown wreck at a site approximately 60 miles east of Point Pleasant, New Jersey. This site was originally suggested to Captain Nagle by a local fishing boat captain who was curious about the site he had been fishing for years. Although several experienced offshore fishermen were discretely fishing the site, it was relatively unknown, and had never before been visited by divers.

Upon descending to the wreck, divers discovered what appeared to be the remains of a submarine in approximately 230 feet (77 meters) of salt water.  The general appearance was that of a World War II era wreck.  On subsequent dives it was discovered that there were human remains aboard the wreck.

Cursory research of area charts and historical records gave no clue as to the wreck’s identity.  In only a short time the submarine was confirmed to be a World War II German U-boat. It was relatively easy to rule out the possibility that the wreck was one of the two U-boats reportedly lost in the region.  The reported sinking of the U-550 (approximately 150 miles north and east of the dive site on April 16, 1944) and that of the U-521 (approximately 110 miles south of the dive site on March 17, 1943) were well documented with submarine survivors. The possibility that the wreck we had located at 39º 34’ North Latitude, 73º 02’ West Longitude, was either the U-521 or the U-550 was virtually impossible.

The identity of the wreck was indeed a mystery.  The divers nicknamed the wreck the “U-Who” and actively sought to identify the submarine and the men whose remains were still aboard.

Illustration #1 (left) – Captain Dan Crowell’s rendering of the wreck as it existed at the time of the discovery in 1991.

PHYSICAL EVIDENCE FROM THE SITE

Item #1 – On September 29, 1991, intact crockery bowls marked with the eagle and swastika and dated 1942 were recovered.  These items were located aft on the port side of the non-commissioned officers quarters.  The bowl in the photographs currently is in the possession of the family of Martin Horenburg, the late Funkmeister of the radio room on the U-869. 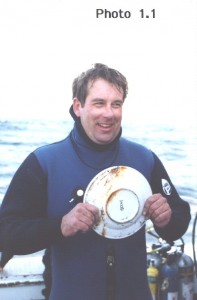 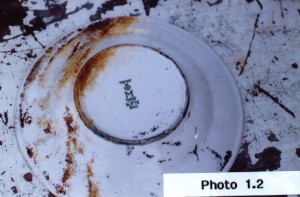 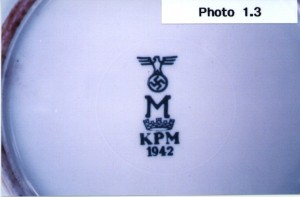 Item #2 – On November 6, 1991, again from the port side of the Non-Commissioned Officers Quarters, a stainless steel dinner knife with a wooden handle was recovered. In the handle was carved a name, “Horenburg”. This artifact is currently in the possession of the relatives of Martin Horenburg, the late Funkmeister of the radio room on the U-869. 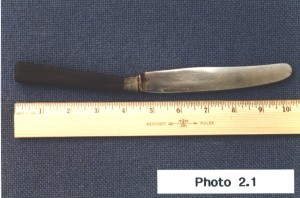 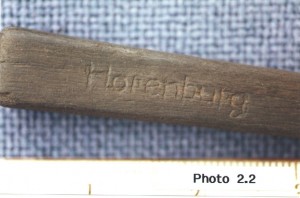 Item #3 – On October 11, 1992, a schematic drawing of the ships trim and ballast systems was recovered.  It is printed on an aluminum sheet and recovered from the area of the Captain’s quarters.  Portions of the legend on this drawing identified it as being from a Type IX C and having been constructed at the Deschimag facility in Bremen. This schematic is currently in the possession of Mr. Horst Bredow of the U-Boat Archives in Cuxhaven, Germany. 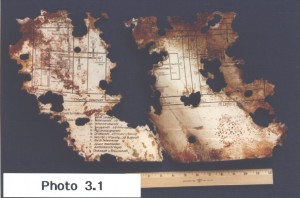 Photo 3.1 – Full view of the schematic 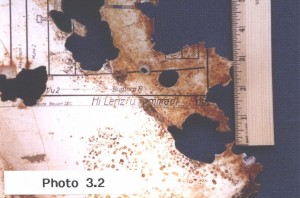 Photo 3.2 – View of the lower right side of the schematic 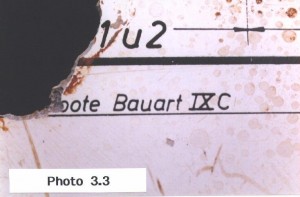 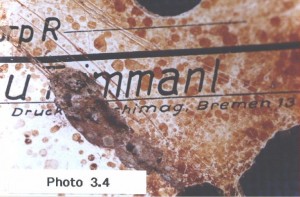 Item #4 – On May 31, 1993, an escape lung was recovered from the area of the radio room.  The high-pressure aluminum oxygen cylinder from the lung had retained its pressure integrity and after salvage the cylinder failed (exploded).  However, from the shoulder of the cylinder remains can be seen the hydrostatic test date of April 15, 1944.  This would be the date the cylinder was tested by the manufacturer prior to distribution for use.  At about this same time divers were also able to finally identify the remains of the ship’s schnorkel.  The schnorkel mast was located adjacent to the main body of wreckage off the port side, forward of the Control Room and partially covered by debris. 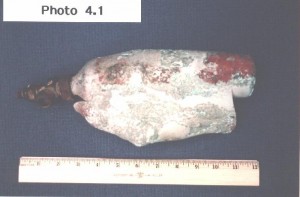 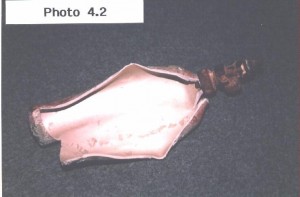 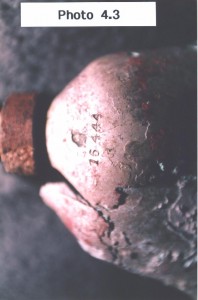 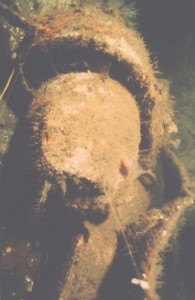 Item #5 – On August 31, 1997, a cooperative effort by divers John Chatterton, Richard Kohler, John Yurga, and Patrick Rooney, resulted in the difficult recovery from the wreck of a wooden box marked with a plastic tag.  The box was recovered from the starboard side of the Electric Motor Room.  The tag is clearly marked with the designation U-869. This item is currently in the possession of Mr. Horst Bredow of the U-Boat Archives in Cuxhaven, Germany. 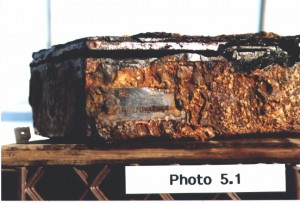 Photo 5.1 – Full view of the wooden box with the tag affixed on the lower left 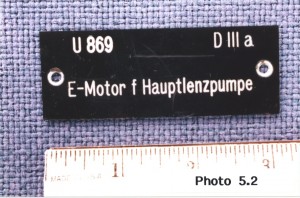 Photo 5.2 – Close up of the plastic tag (after cleaning)

Document #1 – Crew list of the U-869 as compiled by the U-Boat Archives in Cuxhaven, Germany.  This list shows the presence of Funkmeister Martin Horenburg.

Document #5 – US Navy Tenth Fleet U-boat Intelligence Summary dated 25 January 1945.  Section 2, Subsection (a) describes the Allied belief that the U-869 might in fact still be headed for the New York approaches, despite a change in operational orders directing her to Gibraltar.

Document #6 – US Navy Fleet Assessment of the attacks relative to the U-869 being sunk off Gibraltar (3 pages).